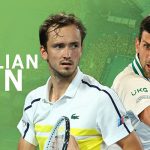 With my top two picks to win this year's Australian Open set for what looks like a thrilling finals showdown, it's time to find out which player is offering the best betting value against their Australian Open odds.2021 Men's Australian Open Finals Betting Preview#1 Novak Djokovic Vs #4 Daniil Medvedev When: Sunday, Feb. At MyBookie you can bet, check and compare AFL odds and lines for all regular season Aussie Rules matches, plus future bets and props on the annual playoffs and championship round. What are you waiting for? Sign up for a free account and let the action begin!

Okay MyBookie Australian Football betting faithful, with the Richmond Tigers and the Geelong Cats set to meet in the 2020 AFL Grand Final, it’s time to find out which team is offering the best value against their AFL odds.

The defending champion Tigers will look to claim their third title in the last four seasons while Geelong looks to win their first since taking home the championship hardware in 2011. The 2020 grand final will feature a pair of firsts as this will be the first grand final not played in Melbourne and the first final to be played at night. Now, let’s find out where the best value lies in this intriguing affair.

Why Bet On Geelong

Geelong finished the regular season in fourth place in the AFL ladder. The Cats blew out Collingwood 100-32 in the quarterfinals on October 10 before backing that win up with an emphatic 82-42 smackdown of Brisbane in the semifinals on Saturday.  Geelong has won nine of their last 11 matches, but one of those defeats was a humbling 57-31 loss against Richmond on Sept. 11. Now, fielding the oldest team to ever reach a grand final, the Cats are hopeful they can solve the plethora of problems the defending champions present.

“We are very similar in certain respects but the differences are very stark as well,” Geelong coach Chris Scott said of the grand finalists.

Why Bet On Richmond

The defending champion Tigers finished the regular season in third place. Geelong smacked St Kilda senseless in their 80-49 quarterfinal win on October 10 before following that win up with a hard-fought 46-40 win over league-leading Port Adelaide on Saturday. The Tigers have won a blistering eight of their last nine matchups. Now, they’ll look to cap off their 2020 campaign by repeating as league champions and Richmond coach Damien Hardwick believes his team will get the season-ending win.

“Our game is better,” Hardwick said  after the Tigers’ huge road win over Port Adelaide last weekend. “We’re more consistent … we don’t rely on any one player to dominate like some other sides do.”

While Richmond are defending champs and favored to repeat by winning this matchup, I like Geelong to pull off, what to me, amounts as a minor upset. Geelong has been seriously impressive in both of its last two postseason games while Richmond struggled mightily to put away Port Adelaide last weekend. I suspect that the Power took something out of Richmond in that contest and now, the Tigers will be just a bit less energetic in this grand final showdown.

With Geelong averaging 91 points over their last two, I don’t see a way that Richmond can slow the Cats down. This one should be an absolute thriller, but I’m going with the Geelong Cats to take home the AFL Championship hardware!

Posted: Thursday, October 22, 2020 5:16, EDT
Okay MyBookie Australian Football betting faithful, with the Richmond Tigers and the Geelong Cats set to meet in the 2020 AFL Grand Final, it’s time to find out which team is offering the best value against their AFL odds. AFL 2020 Grand Final Odds and Predictions The defending champion Tigers will look to claim their third title in the last Read More

Posted: Thursday, October 15, 2020 2:30, EDT
With only four teams remaining in the race to claim the 2020 AFL championship, it’s time to find to look at both preliminary finals matchups and the four teams still standing. On Friday night, league-leading Port Adelaide will look to take another step toward winning it all when they host Richmond in a battle of top three teams. One day Read More

Posted: Tuesday, October 6, 2020 3:40, EDT
With the 2020 AFL season steamrolling into its quarterfinal round, it’s time to take a look at this weekend’s quickly approaching matches. With four teams remaining in the chase to claim this season’s AFL Championship title, let’s find out where the best Australian Football betting value lies in the two seminal clashes that will take place beginning on Friday, Oct. Read More

Posted: Wednesday, September 30, 2020 5:38, EDT
Okay MYBookie online Australian Football betting buffs, with the first round of postseason action set for this coming weekend, it’s time to find out where the best betting value lies in the quartet of AFL qualifying and elimination matches that will get underway, starting on Thursday, October 1. The top-seeded Port Adelaide Power and second-seeded Brisbane Lions highlight the top Read More

Posted: Friday, September 25, 2020 2:07, EDT
With the 2020 AFL Premiership season heading into its opening slate of postseason action as the AFL Finals get underway starting on Thursday, October 1, it’s time to find out which teams look like they’ll advance out of the elimination round to reach the semifinals. With a quartet of elimination matchups on the docket, let’s find out where the best Read More

Posted: Wednesday, September 16, 2020 3:55, EDT
Okay MYbookie Australian Football betting faithful, with the final week of regular season action here and two teams already into the postseason, it’s time to take a look at the most intriguing matchups on the Round 18 docket, along with their AFL odds. 2020 AFL Odds and Picks for Round 17 for Sept. 18th-19th St. Kilda Vs GWS St. Kilda Read More

Posted: Wednesday, September 9, 2020 1:25, EDT
Okay, MyBookie Australian Football League betting faithful, with just two weeks of regular season action remaining in the 2020 AFL campaign, it’s time to find out which matchups on the Round 17 schedule are offering the most value. League-leading Port Adelaide will look to take another step toward finishing off their quest for league supremacy? Could the Geelong Cats, Brisbane Read More

Posted: Monday, August 31, 2020 12:55, EDT
Can third place Brisbane and fourth place Richmond move up the ladder to challenge for first place with four weeks of regular season action remaining? Can 12th place Carlton pull off the big upset to challenge for a spot in the top eight or will ninth place GWS take care f business at home? With a modest six-game slate of Read More

Posted: Wednesday, August 26, 2020 4:48, EDT
With the 2020 AFL regular season rolling right along as it approaches the completion of its 18-week schedule, it’s time to take a look at the top three matchups on the round 14 docket. Fourth-place West Coast will be on the road looking to take down fifth place Richmond. The eight place Bulldogs will look to do the same when Read More