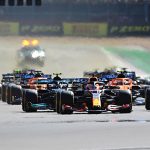 This is shaping up to be one of the most exciting Formula 1 seasons that we have seen in quite some time. We have grown so accustomed to seeing Lewis Hamilton wrap up the title early that we have forgotten what an exciting championship battle looks like. We are getting it this year, though, with Hamilton and Max Verstappen taking turns atop the driver standings. This is shaping up to be one of the most exciting Formula 1 seasons that we have seen in quite some time. We have grown so accustomed to seeing Lewis Hamilton wrap up the title early that we have forgotten what an exciting championship battle looks like. We are getting it this year, though, with Hamilton and Max Verstappen taking turns atop the driver standings. It is the Dutchman who is there now, but the lead is just 3 points, which is about as tight as it gets. It was definitely good to see a good race in the Netherlands last weekend after the debacle that was the Belgian Grand Prix. Verstappen moved back to the top, but will he stay there? This weekend, the drivers will be in Italy to tackle the famed Monza track. Who will come out on top in the 2021 Italian Grand Prix? Let’s try to find that out so you can bet against their Formula 1 odds.

A lot of F1 fans believed that Hamilton would come out and dominate again on his way to a record-setting 8th World Championship. While there have been times when he has looked great, he has, more often than not, been forced to play second fiddle to Verstappen. Over the coming weeks, we are going to get to see what the champion is made of and just how badly he wants that world record. It may now be 3 races since his last win this season, but I would never count him out of any race. Hamilton is just that good. He does have wins at previous Italian Gran Prix races, but not in the last 2 years. In fact, he had one of his worst runs of the season in Italy last season, finishing 7th in that one.

While the final outcome of the Belgian Grand Prix was all about the weather and nothing to do with any driver, Verstappen still took some heat for getting a win in a race where only a few laps were actually completed. If that bothered him, he certainly didn’t show it, as he proved that he deserves to be on top of the driver standings with a brilliant run in his home country. His win in the Dutch Grand Prix was the 7th of the season for Verstappen, which is an absolutely brilliant record. Like Hamilton, though, Verstappen does not have the best record in Italy. He was forced to retire last season and finished 8th the season before that.

The Best of the Rest

This is a race that has delivered a surprise winner in each of the past 2 seasons. In 2020, it was Pierre Gasly that got the win, with Charles Leclerc winning it in 2019. If you fancy either of those guys to win it again, you have some great odds to choose from. Leclerc is currently sitting at +5000, while Gasly is in at +10000. Saying that they are longshots is putting things rather mildly.

Posted: Friday, September 10, 2021 12:33, EDT
This is shaping up to be one of the most exciting Formula 1 seasons that we have seen in quite some time. We have grown so accustomed to seeing Lewis Hamilton wrap up the title early that we have forgotten what an exciting championship battle looks like. We are getting it this year, though, with Hamilton and Max Verstappen taking Read More

Posted: Friday, September 3, 2021 3:09, EDT
This has been an exciting season so far in Formula 1, but last weekend in Belgium, things turned a little more to the controversial side. Race day saw Mother Nature open up the skies and dump an enormous amount of rain on the track, so much so that visibility issues became a real concern. Drivers were not happy at being Read More

Posted: Friday, August 27, 2021 3:46, EDT
There are a couple of different ways to look at how Formula 1 has played out over the past decade or so. Some fans are happy to sit back and watch Lewis Hamilton on his quest for history, while others crave the days when the race for a World Championship was an exciting one that went down to the wire. Read More

Posted: Friday, July 30, 2021 3:46, EDT
The 2021 Formula 1 season may well have come to life at the British Grand Prix. It was beginning to look as though Max Verstappen was going to run away with the World Championship this season, but things took a rather dramatic turn in a single moment in the UK. Verstappen and Hamilton collided, with the Dutchman crashing and the Read More

Posted: Friday, July 16, 2021 3:18, EDT
We are not yet at the midway point of the 2021 Formula 1 season, but there are already rumblings that we might be about to see a changing of the guard. The general consensus heading into the season was that Lewis Hamilton would put on another show and waltz off with his record breaking 8th world championship, and while he Read More

Posted: Thursday, July 1, 2021 1:52, EDT
There is still a whole lot of racing to come in this Formula 1 season, but it is beginning to look as though we are beginning to see a definite change in the regular order of business. In years past, we have come to expect Lewis Hamilton to go out and win every race, while also expecting him to win Read More

Posted: Friday, June 25, 2021 3:15, EDT
Formula 1 is one of the most watched global sports, yet you have to say that over the past decade or so, it has become more than a little predictable. The reality is that we had basically reached a point where the biggest question to be answered was how many points Lewis Hamilton would win the World Championship by. Heading Read More

Posted: Friday, June 18, 2021 4:22, EDT
After a disrupted 2020 season, Formula 1 is back with a full slate of races on the calendar for 2021. It is also back with a chance of history being made. As fans of F1 are already probably aware, a world championship for Lewis Hamilton this season would mean that he would pass Michael Schumacher for the most titles in Read More

Posted: Friday, May 21, 2021 2:52, EDT
If you asked fans of motor sports about which one race they would love to attend in person, you could almost guarantee that the F1 Monaco Grand Prix would be at the top of the list. There is just something special about the setting and seeing high-powered race cars navigate the tight, twisting streets in Monaco. We are set for Read More