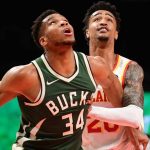 The National Basketball Association (NBA) is the premier men’s professional basketball league in the world. It is composed of 30 teams; 29 in the United States and 1 in Canada. The NBA playoffs are a best-of-seven elimination tournament annually held after the NBA regular season to determine the league’s champion. Check out our NBA Finals Championship Odds, News & Analysts

NBA TV Coverage in the United States is shared across TNT, ESPN, and NBA TV. NBA Doubleheaders are common throughout the season as games are aired back to back, with the different networks having different names for their NBA Broadcasts, ESPN has Wednesday Night NBA & Friday Night NBA, as well as NBA Saturday Showcase and NBA Sunday Showcase, the NBA on TNT features NBA Players Only as well as the generic label NBA on TNT. 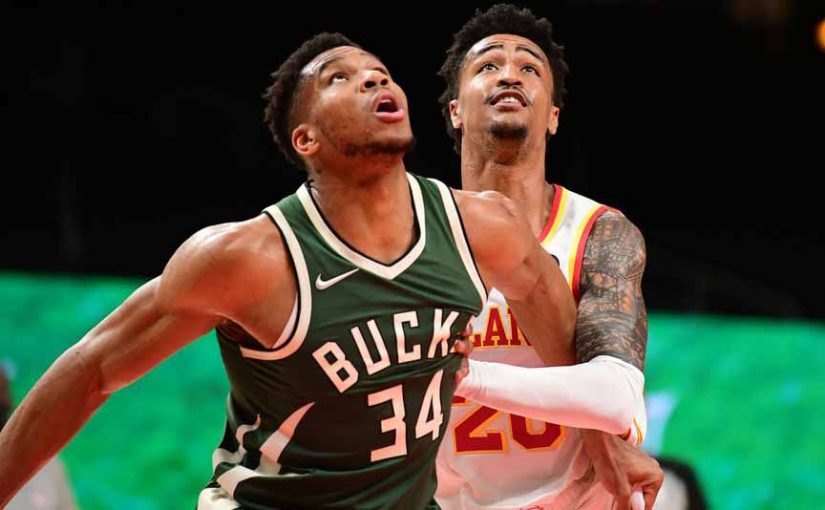 It’s an NBA Eastern Conference Finals matchup that surely not many basketball fans or bettors expected as the fifth-seeded Atlanta Hawks visit the No. 3 Milwaukee Bucks in Game 1 on Wednesday night with the Bucks solid favorites on the NBA odds.

How to Bet Hawks at Bucks NBA Odds & TV Info

Bucks won 2-1. The teams last met April 25 in Atlanta and the Hawks got their lone win in the series, 111-104. Lou Williams scored all of his 15 points in the fourth quarter. Williams missed seven shots from the field before his drought-breaking 3 gave Atlanta its first lead of the second half at 85-84 with 6:59 remaining. Bogdan Bogdanovic scored 32 points to lead the Hawks. Star Trae Young didn’t play. Giannis Antetokounmpo had 31 points with 14 rebounds for Milwaukee. Khris Middleton had 23 points, and Jrue Holiday had 19 points with 11 assists.

Why Bet on Atlanta?

The Hawks stunned top-seeded Philadelphia on the Sixers’ own court Sunday in Game 7, 103-96 – the Hawks franchise had been 0-9 in road Game 7s all time. Kevin Huerter blew up with a playoff career-high 27 points, adding seven rebounds and three assists. With De’Andre Hunter out due to a meniscus tear and Bogdan Bogdanovic fighting his way through knee soreness, the Hawks needed someone besides Trae Young to step up in Huerter did.

“With guys going out, we’re definitely telling him that we need him to be more aggressive and score the ball a little bit more – and just play free,” Trae said. “Relax, have fun, score when you’ve got it, and make the right play.”

Young was just 5-for-23 from the field for 21 points but did have 10 assists in 43 minutes played. Coming into the game with a shoulder injury, Young was unable to find his rhythm on the offensive end of the floor. But he scored 10 of his 21 points in the fourth quarter. John Collins finished with 14 points and 16 rebounds.

The Hawks were underdogs in all seven games against the 76ers, even with them being up 3-2 with a chance to close the series at home. Among those remaining in the postseason, Young leads all active players in points (29.1), assists (10.4), and made free throws (7.8) per contest, and he ranks third in made threes (2.8).

“I just see this team, they go out and fight,” Clint Capela said. “They do not worry about who’s in front of them, they do not worry where we are, they just go out there and play.”

This makes Atlanta just the second team under the current NBA playoff format to make the Conference Finals without an All-Star on their roster – the other was the 1994 Indiana Pacers. The Hawks have won two playoff series for the second time since they came south from St. Louis. Atlanta last reached the East Finals in 2015 and was swept by Cleveland.

After firing coach Lloyd Pierce and promoting Nate McMillan in early March, Atlanta posted the NBA’s seventh-best net rating (+4.5) during the rest of the regular season, just ahead of Milwaukee’s (+4.1) over the same span

Why Bet on Milwaukee?

This is the fifth time the Bucks and Hawks are meeting in the playoffs, with this being their first meeting since the First Round of the 2010 postseason. The two teams have split their previous four playoff series, 2-2.

The Bucks won an epic Game 7 in Brooklyn on Saturday, 115-111 in OT – the NBA’s first do-or-die OT game in 15 years. Nets star Kevin Durant played all 53 minutes and forced OT with a turnaround jumper that was just inches from being a 3-pointer that would have won it with a second left. The Bucks held on in OT when Durant missed two late jumpers, the last an airball with 0.3 seconds remaining.

Giannis Antetokounmpo led the Bucks with 40 points, 13 rebounds and five assists, marking the second 40-point game of his playoff career. It was also Antetokounmpo’s fifth consecutive game with 30+ points and 10+ rebounds, which is tied with Kareem Abdul-Jabbar (1974) for the longest 30/10 streak in Bucks playoff history. The last player in the NBA to have a 30/10 postseason streak of five games was Shaquille O’Neal who had a six-game streak during the 2000 playoffs.

Middleton finished Game 7 with 23 points, 10 rebounds, six assists and five steals. He hit some key jumpers down the stretch and Middleton’s 52 minutes established a new season high. After the Bucks went down 2-0 against the Nets, Middleton averaged 28.0 points, 8.6 rebounds, 5.0 assists and 2.6 steals over the final five games of the series.

This could be the best position to win a title the Bucks have been in since Kareem Abdul-Jabbar and Oscar Robertson were playing there in the 1970s. Not even those Hall of Famers won a Game 7 on the road for the Bucks.

Bucks coach Mike Budenholzer came from Atlanta, where he compiled a 213-197 (.520) record in five seasons as head coach of the Hawks from 2013-18. Budenholzer was named NBA Coach of the Year following the 2014-15 season after he led the Hawks to a franchise-high 60 wins and an appearance in the Eastern Conference Finals. Atlanta made the playoffs in four of Budenholzer’s five seasons with the team.

Keep an eye on the foul calls in this series as Hawks star Trae Young is a savant at drawing contact as he’s averaging 8.8 free throw attempts per game during the playoffs.o However, the Bucks were the league’s most disciplined team as they had the lowest opponent free throw attempt rate during the regular season.