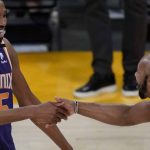 The Miami Heat were thoroughly embarrassed in Game 2 of their Eastern Conference playoff series in Milwaukee and are down 2-0 in the first round. The series shifts to Miami for Game 3 on Thursday with the Bucks slight favorites on the NBA odds.

How to Bet Bucks at Heat NBA Odds & TV Info

The Bucks came out hitting everything in sight in Game 2 and never stopped, blowing the doors off visiting Miami 132-98. Their 10 3-point baskets matched an NBA record for the most in a quarter, and their 26-point lead matched the largest after the first quarter in postseason history.

The Bucks led 46-20 at the end of the opening period and 78-51 at the break, posting the highest first-half point total in their playoff history. They finished with 22 made 3-pointers, a new franchise playoff high and handed the Heat their 2nd worst playoff loss in franchise history.

In scoring 46 first-quarter points, the Bucks scored on 18 of the 20 possessions in which they didn’t commit a turnover. They shot 18-for-25 and rebounded five of their seven misses. Save their six turnovers, it was a complete offensive performance. After a turnover on the first play of the game, the Bucks scored 15 points on their next six possessions.

Giannis Antetokounmpo played well in Game 2 per usual with 31 points, 13 rebounds, six assists, three steals and one block. Giannis recorded his 5th career playoff game with 30 points, 10 rebounds and five assists in 35 minutes or less. The only other player with more than one such game all-time is LeBron James with two.

Jrue Holiday had 11 points, 15 assists and seven rebounds. Holiday set a new season high and career playoff high with 15 assists — the most in a playoff game by a Bucks player since T.J. Ford in 2006. Holiday is the fifth player in Bucks playoff history with a 15-assist game, joining Paul Pressey (3 times), Oscar Robertson (2 times), Ford and Jay Humphries (once each).

“If my man got the hot hand, I’m going to him,” Holiday said. “And he wasn’t missing, so at that point we were running everything to him just to — really just to see what happens.”

Khris Middleton added 17 points and Pat Connaughton had 15 while shooting 5 of 9 from beyond the arc. Over the first two games of the series, Milwaukee has posted a miniscule defensive rating of 100.4, locking up Miami both in the half court and in transition.

Miami simply needs more from star Jimmy Butler, who is shooting just 2-for-7 across 46.1 partial possessions when being guarded by Giannis Antetokounmpo. The two-time MVP has surrendered just five points when guarding Butler throughout these first two games.

In Game 1, Butler shot 4-for-22, but at least had 10 free throw attempts in his 46 minutes. In Game 2, he had just four free throw attempts to go along with his 4-for-10 from the field. Butler had 17 drives on Monday, nine more than any other player on either team. But most of those drives ended in nothing productive.

Butler drew just one foul, scored just five points, and recorded just three assists on the 17 drives. Despite a sustained 20-plus-point deficit, Butler played well into the second half and finished as the only Heat player north of 30 minutes. Butler had the worst plus-minus (-32) of any half he’s played in his NBA career, regular season or playoffs.

One bright spot Monday was Dewayne Dedmon off the bench for a playoff career-high 19 points, chipping in nine rebounds in 21 minutes. Dedmon had never even eclipsed double figures in the playoffs before Game 1. Despite the great performance, the fact that Dedmon led the Heat in scoring should signal some worry for the team. Bam Adebayo had 16 points and just three rebounds. Goran Dragic added 18 points, but no one else did much. Tyler Herro, for example, had just four points.

“This is the playoffs,” Erik Spoelstra told reporters after the game. “They all count the same, whether you win in a possession game or like this. But we need to be better.”

Overcoming the odds will require a dramatic change in fortune, and it’ll have to start on the offensive end, where Miami is shooting a dismal 38.1 percent from the field in two games.