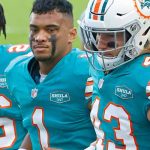 The Dallas Cowboys (1-1) defeated the Los Angeles Chargers (1-1) thanks to Greg Zuerlein’s 56-yard field goal at the end of regulation. The kick capped an 11-play, 49-yard drive that was engineered by quarterback Dak Prescott. The Cowboys quarterback had an efficient afternoon completing 23 of 27 attempts for 237 yards and an interception, good for a passer rating of 87.8.

Posted: Friday, September 17, 2021 1:21, EDT
Two teams with playoff inspirations throw down at SoFi Stadium in Inglewood when the Dallas Cowboys head to Hollywood to take on the Chargers. LAC won their first game of the season, getting past a tough WFT defense. Dallas almost pulled off the upset versus the Tampa Bay Buccaneers. Keep reading for NFL odds, analysis, and a free pick for Read More

Posted: Tuesday, September 14, 2021 10:18, EDT
Maybe no team looked better in Week 1 of the NFL season than the Arizona Cardinals and quarterback Kyler Murray. They could be a sleeper pick to win the NFC this year. Here’s a look at their matchup vs. Minnesota in Week 2 and one other marque game with NFL odds. 2021 NFL Regular Season – Week 2 Matches To Read More

Posted: Tuesday, September 7, 2021 10:12, EDT
The 2021 NFL season is here! The Dallas Cowboys visit the defending Super Bowl champion Tampa Bay Buccaneers in the Kickoff Game on Thursday night, but the Cowboys will be without maybe the best offensive lineman in the NFL. Tampa is solidly favored on the NFL odds. How to Bet Cowboys at Bucs NFL Odds & TV Info When: Thursday, Read More

Posted: Wednesday, August 11, 2021 6:41, EDT
On Friday, the Dallas Cowboys head to State Farm Stadium in Glendale, Arizona to take on the Cardinals. The August 13 matchup will be Dallas’ second preseason game of the year. Will the Cowboys show enough to upset favored Arizona? Or will the Cardinals prove they’re an NFC West contender? Check out NFL Preseason odds, analysis, and a free pick Read More