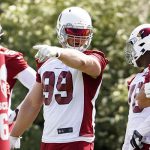 The Arizona Cardinals were completely average at 8-8 last season, yet somehow have formed playoff, even Super Bowl aspirations heading into next season. Let's take a closer look at what lies ahead for the Cardinals into next season so you can plan your bets against their NFL Team Totals odds.Arizona Cardinals Win/Loss Betting Odds and Prediction for the 2021-22 NFL SeasonGearing Up for BattleWhile this may sound outlandish at face value, the Cardinals had a tremendous offseason: they drafted ballhawk Zaven Collins sixteenth-overall and signed free agents JJ Watt, Malcolm Butler, James Conner, A. The NFL Draft is an annual event in which college football players are selected to join all the 32 NFL teams. This three-day event has always captured the attention of the betting world and here at MyBookie, we have the odds for every player! Here, you can review, compare, and bet on the latest odds for the NFL Draft right up to the day of the event.

The NFL Draft odds for each player to be the No. 1 overall pick have been up for months at MyBookie. So as we get closer to the event, the odds for the Draft will continue to fluctuate daily. So keep in mind that time is running out to place that winning Draft bet with the best odds on the market.

Bet on the NFL Draft with MyBookie today!

The Arizona Cardinals were completely average at 8-8 last season, yet somehow have formed playoff, even Super Bowl aspirations heading into next season. Let’s take a closer look at what lies ahead for the Cardinals into next season so you can plan your bets against their NFL Team Totals odds.

Gearing Up for Battle

While this may sound outlandish at face value, the Cardinals had a tremendous offseason: they drafted ballhawk Zaven Collins sixteenth-overall and signed free agents JJ Watt, Malcolm Butler, James Conner, A.J. Green, Rodney Hudson, and Matt Prater. These moves add nineteen years of Pro Bowl experience to Arizona’s roster and set them up nicely to compete in what is arguably the best division in the NFL.

The Cards will be competing against the reigning division champion Seattle Seahawks and MVP-candidate Russell Wilson, a Los Angeles Rams squad that traded for quarterback Matthew Stafford, and a San Francisco 49ers team that is only one year removed from a Super Bowl appearance.

Arizona started the year with division wins at home against the 49ers and on the road at Seattle but lost every matchup after their Bye Week in Week Eight, finishing 2-4 in rivalry games. Former first-overall draft pick Kyler Murray dealt with nagging injuries down the stretch after he had gotten off to a near-MVP start, causing Arizona to finish on a 2-5 streak.

With Murray back at 100% and having the complements of DeAndre Hopkins, Larry Fitzgerald, A.J. Green, and rookie combine-standout Rondale Moore, he is set up for a massive statistical season.

Arizona’s over/under for the season has been set at 8 wins, with -130 on the over and +110 on the under; remember, the regular-season schedule now includes 17 games instead of 16.

These odds may seem insulting to a team with an explosive offense and improved veteran defense, but they still have to play six games against three of the best teams in the NFC.

Ignoring divisional matchups, the Cardinals will play the Minnesota Vikings, Houston Texans, Green Bay Packers, Carolina Panthers, and Indianapolis Colts at home. Of these, they have two near-definitive wins against the Texans and Colts— Green Bay only lost three games last year, two of which were on the road, and they should win this one, assuming they still have Aaron Rodgers taking snaps. That leaves two toss-ups against the Vikings and Colts, and I predict they take the former and drop the latter, giving them three intra-divisional wins at home.

The Cards will travel to play the Tennessee Titans, Jacksonville Jaguars, Cleveland Browns, Chicago Bears, Detroit Lions, and Dallas Cowboys. The Browns will hold serve at home, although I suspect a vulnerable Tennessee defense will grant the Cardinals their first win of the season in the opening-week matchup; Jacksonville will make a surprise home stand while Dallas will also win, leaving Arizona wins at Chicago and Detroit. This would bring the Cards to six wins on the season before factoring in rivalry games.

If Arizona manages to win half of their divisional contests, they will reach nine wins and hit the over. I am expecting them to do just that, beating LA on the road in Week Four and San Fran in week Five, then closing out the regular season with a win against the Seahawks. Seattle is 3-2 in their final-week games since 2016 and has not won by more than three points, meaning that the game should be there for the taking.

Based on the logic of the game-by-game breakdown, I am backing the Cardinals to hit the over of eight wins and go 9-8 next season. Kyler Murray will have another impressive season, although the hype around the three-headed monster at receiver will be overblown. If Tom Brady cannot get Mike Evans, Chris Godwin, and Antonio Brown to produce extraordinary numbers in a pass-happy offense, this trio is unlikely to do much better.

The defense will be solid, but Watt and Butler are not the players they used to be. If the Cardinals can add another key piece in next year’s draft or offseason, then I could see them heading north of 12 wins.

Bet on Arizona to reach more than eight wins in the toughest division of football, and do not look back.